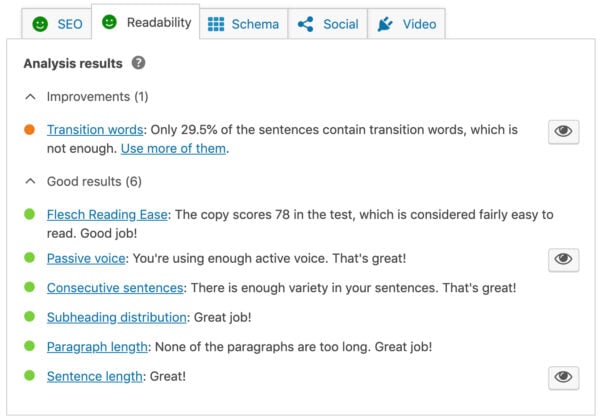 Writing seems simple enough, but writing a compelling text that keeps the attention is quite hard. Especially online. To keep people on your page, you need to write quality content that’s easy to read. Easier said than done? You’re absolutely right. That’s why we introduced a readability analysis in our Yoast SEO plugin five years ago. To celebrate its 5-year anniversary, our CEO Marieke van de Rakt and Irene Strikkers (creators of the analysis) explain why readability is important for your content SEO.

The importance of readability

Can you tell us why readability is important?
Marieke: “If a text is nice and easy to read, you’ll have a higher chance that your readers will stay on your page and read your text. They won’t get bored as quickly and there is a bigger chance that they understand your message. Sometimes the thing you’re explaining might be difficult, but your wording or structure should never make it more difficult.”

And why is readability important for SEO?
Marieke: “Google tries to give the user the best experience possible. If a text is nice and easy to read, that’s just better for the user. So, indirectly via the user readability is important. But above that, there’s also a direct effect: Google reads text too. Google’s algorithm tries to mimic a human. So, if Google reads texts the same way humans do the demands of readability rise.”

Read more: What is readability and why is it important? »

How the readability analysis came to life

Where did you get the idea of creating a readability analysis?
Marieke: “Well… the idea came from me. We had the SEO analysis in our plugin and I felt like it was sometimes forcing people to write texts that weren’t readable at all. Focusing too much on SEO can comprise the readability of a text. I felt like we needed something to balance that. Plus, the Panda update and Hummingbird update showed us that texts and context mattered. So, readability was becoming more important for SEO. And that made the need for a tool to help people with their readability more pressing.”

“We decided to hire a linguist to help us develop the readability analysis. And that’s when Irene came to Yoast.”

Irene: “I joined in 2016 for what was planned to be a 6-month project. However, it turned out that there was so much we could do and build. And there were so many things that needed language-specific research, that it has been an ongoing project ever since. We now even have an entire team that’s working full-time on adding language-related features.”

Were there similar tools around at that time?
Irene: “There were quite some tools correcting spelling and grammar, but very few tools focusing on readability. The ones that did exist didn’t really give actionable feedback. They would say a sentence was hard to read, but not explain what to do about it. Or they would focus on very specific details within sentences, like finding adverbs that could be removed. On top of that, almost all feedback would be on a sentence level. We saw very few tools that would give feedback on the structure of the text, for example on paragraph length or the use of subheadings.”

What did the process of creating the readability analysis look like?
Irene: “We started by doing some research into the existing tools and what they did. In addition, we read scientific papers about the factors that influence the readability of a text. This allowed us to create a long list of potential readability checks and do exploratory research into what the algorithms could look like. It also helped us decide if it was feasible to create an algorithm for them in the first place.”

“Together with the board of Yoast, we decided which checks we would implement. Which ones would be reliable, feasible and could have actionable advice we could give as feedback. After that, we did more research into what the algorithms should look like, what the boundaries would be and with that, the scores of the different colored bullets in our analysis. But also, what the weight of the different checks should be in the overall readability score of a text.”

“With all of that decided on, we could start with the implementation of the checks in our Yoast SEO plugin. And of course, lots of testing and finetuning to get where we wanted to be. We used real-world texts to see if the scores of the individual checks, as well as the overall score, made sense. Even in this last phase, one of the checks was removed because it was just not reliable enough.”

What the analysis can help you with

What can the readability analysis do for Yoast SEO users?
Marieke: “I think our analysis can really help users to write a text that is nice and easy to read. And that will help their users understand the message better. Writing can be hard, we’re making it a bit less hard.”

Doesn’t it depend on my audience how difficult my text should be?
Marieke: “Of course, if you have a very niche audience, you might get away with a text that is more complicated. However, the entire idea of SEO is to reach an audience beyond the people you already know and reach. SEO is about attracting more people, people outside your specific niche. Writing a readable text is about opening up your knowledge for more people.”

“I wrote a dissertation on the intergenerational transmission of criminal convictions over the life course. That’s pretty difficult. That even passed the readability test.”

The analysis can be used in more than 15 languages right now, but how do you decide on what language to add next?
Marieke: “The language availability in our analysis has to do with the number of users we have in a certain country or language, but also with our expertise. In order to add a language, we need to have a linguist that knows the language. Otherwise, it is really difficult. That’s why we’re not that far yet in languages such as Japanese. “

Irene: “Recently, we started working with native speaker consultants as well. That way, we are less dependent on how many languages we speak ourselves. Those consultants do most of the research for their mother tongue, and our linguists guide them and implement the check based on their input.”

Where do you get the input for the analysis in different languages?
Irene: “Whether we work on a language one of us speaks, or when we work with a native speaker consultant, every new language addition starts with a lot of research. We need to figure out how to detect passive voice, draw up a list of transition words, find a way to count syllables, and much more. We also need to research the boundaries for the assessments. For example, 20 words is a sensible sentence length limit for English, but 15 words turned out to be a better boundary for Hebrew. For all of this, we use a combination of language knowledge from the person doing the research and other available sources about the specific language.”

How much has the readability analysis changed in the past 5 years?
Marieke: “I think the biggest change in our analysis has to be the support for many different languages. We started out with an analysis that focused on English, but nowadays it can be used in more than 15 languages.”

What is your favorite feature in the readability analysis?
Marieke: “I like the short sentences. That’s the best way to make a difficult topic more understandable. If you write for a niche you probably need to use specific words. Shortening your sentences will really open up your writing for a broader audience.”

Irene: “I’m a fan of the transition word assessment. People learn about transition words like however, therefore and in addition in school when you learn to read and understand text. However, later in life, some people tend to forget they exist. Using transition words throughout your text can really make the difference between a cohesive text and just a sequence of sentences.”

Can we expect any upcoming changes to the analysis anytime soon?
Marieke: “We have so many ideas… but we can’t build everything at once. We’ll keep adding languages for sure. But we’re also thinking about a tool on how to write inclusively.”

Irene: “To add to that, we do have plans to expand our linguistics team. Which means we’ll be able to do more research and build things more quickly in the future!”

What can we expect before our readability analysis turns 10?
Marieke: “We’ll cover many more languages! And we’ll have additional functionality, like an inclusive writing check. We might also do spelling and grammar checks. I think the Yoast SEO readability analysis should be a tool that can help you with every aspect of your writing!”

Irene: “I’d really like to add more non-Indo-European languages. For languages like Japanese, which don’t use spaces between words, even counting words is hard for us. We’ve done some initial research for Japanese, and have had plans many times to really start working on that language. I think that somewhere in the next 5 years, that will finally happen!”

We hope you’ve enjoyed this interview and the insights into our analysis! If you want to know more, you can read our article on how to use the analysis or get Yoast SEO to get started with the readability of your content.