What Is Cameo? Using Celebrity Videos to Promote Your Brand 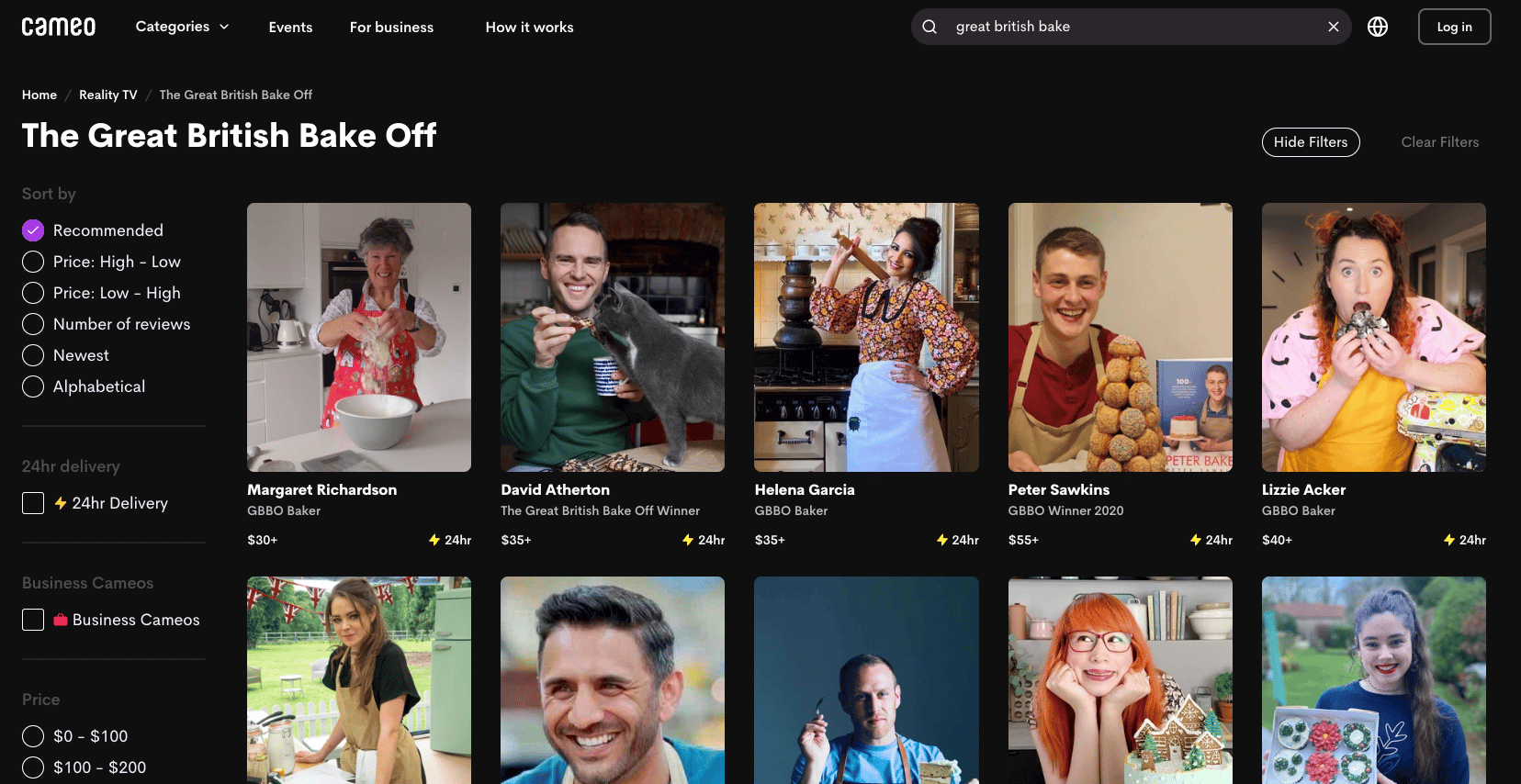 What Is Cameo? Using Celebrity Videos to Promote Your Brand

If you’ve ever wanted George Costanza to roast your dad on Festivus or Chaka Khan to sing you happy birthday, Cameo can make your dreams come true. You probably know Cameo as a platform that allows fans to request celebrity videos, but did you know that you can also use Cameo to grow your business?

Read on to find out more about how Cameo can work for you and your company.

Bonus: Get the influencer marketing strategy template to easily plan your next campaign and choose the best social media influencer to work with.

Cameo is a website and mobile app that lets you request personalized video messages from celebrities. Founded in 2016, Cameo connects fans with their favorite actors, athletes, musicians, performers, creators, and social media influencers.

Most users order Cameos for other people because they make a perfect gift — and bonus, no wrapping required. But you don’t need to wait for a special occasion. You can also order a video for yourself or as part of a business strategy.

While Cameo is best known for pre-recorded videos that can be downloaded and shared, you can also book live video calls! Cameo Calls let you chat with your favorite celebrity and invite a group of friends to join you.

How does Cameo work?

Cameo is very user-friendly and easy to explore. Start by visiting their website or downloading the Cameo app to browse celebrities. You’ll need to create a Cameo account to make a request.

You can search Cameo by category, like actors, musicians or comedians. Or you enter specific terms in the search bar, like “Great British Bake Off.” There are thousands of celebrities on Cameo’s marketplace, so using your own search terms is helpful! Using the sidebar menu options, you can filter by criteria like price and rating. If you forgot your bestie’s birthday is tomorrow, you can even restrict your search to 24-hour delivery options!

You can also browse the profiles of celebrities and read their ratings and reviews. Each profile has a selection of videos, so you can check out their style and delivery. Once you’ve selected your celebrity, the fun part begins. First, let Cameo know whether you’re booking for yourself or someone else. From there, Cameo will prompt you for the following details:

If you want your video to stay between you and the recipient, select “Hide this video from [Celebrity Name]’s profile.” Otherwise, it may be shared on Cameo, where other users can view it.

Once you’re done making your request, you fill in your payment details (they accept most major credit cards) and confirm your order. Cameo will send you a confirmation email and let you know how long the celebrity has to fulfill your request. Typically, this is a seven-day window, but some Cameo celebrities offer 24-hour delivery.

When your video is ready, it will appear in your Cameo account. You’ll also receive an emailed link to the video. You can watch the video, share the link directly, or download the file to keep it forever. After you receive your video, you’ll be prompted to write a review. And if for some reason the celebrity is unable to fulfill your request, your payment will be refunded.

Bonus: Get the influencer marketing strategy template to easily plan your next campaign and choose the best social media influencer to work with.

Get the free template now!

How much does Cameo cost?

Cameo prices vary in range, depending on how well-known and in-demand the celebrity is. Brian Cox is $689 (a steal if you have Roy family money), and Lindsay Lohan is $500.

But there’s a huge range, and hundreds of stars offer personalized videos for $100 or less. You can even find options within the $10-$25 range. They might not be household names, but they could be your favorite drag queen or TikTok creator — and that’s what counts!

Can you use Cameo for business?

Yes! Cameo for Business was designed specifically for you. It’s perfect for companies seeking a celebrity endorsement for their new product launch or a host for their upcoming event.

If you’re looking for a video for business purposes, you have to go through the Cameo for Business website. A personal Cameo video can’t be used for promotional or commercial purposes, according to the Cameo Terms of Service.

(That’s why I can’t show you the Cameo I ordered from actor James Marsters, aka Spike from Buffy the Vampire Slayer, which is too bad because it’s incredible.)

But the process of ordering a Cameo for Business is very similar. You can browse more than 45,000 celebrities.

As with personal Cameo videos, there’s a range in prices, but you can typically expect that a business video will have a higher price tag. For example, Lindsay Lohan will create a personalized video for $500, but for a business video, she charges $3,500.

Cameo for Business also offers customized support for businesses. Collaborate with Cameo to create a plan and set measurable goals, and get data-driven recommendations for celebrities that will resonate with your audience.

Cameo will also help you execute your campaign in as little as a week— ideal if you’re on a tight timeline!

6 ideas for using Cameo for business

Through Snap x Cameo, retail brand Mattress Firm created a series of video ads to raise brand awareness, working with a number of celebrities that included NFL stars, TV personalities and content creators. The campaign drove an 8-point lift in ad awareness and resulted in a video view rate that was 3x as high as the industry average.

Celebrity endorsements are a tried-and-true marketing tactic, but that’s because they work!

Snack line Dean’s Dips partnered with Cameo and Hall of Fame baseball player Chipper Jones to create a “Chipper and Dipper” campaign to promote their new dips. Through Cameo, they were able to find a celebrity that fit their customer demographic perfectly. After all, what goes better with sports than chips and dip? In addition to the promotional video content, the campaign included a social sweepstakes, offering fans the chance to have a Cameo Call with Jones. The contest increased engagement and generated more shareable video content for Dean’s Dips. The result was a successful and original product launch.

If you’re looking for a guest host for your podcast or an inspiring speaker for your next event, Cameo is an alternative to traditional speaker bureaus.

You can book speakers for hosting gigs and panels, but also co-create a custom event agenda that builds off the star’s personality. Kressley played games with attendees and did audience engagement, which played to his strengths as a TV host and presenter— and ensured the event was a smash success.

The pandemic threw a wrench in workplace culture initiatives, as working from home became the new norm. While remote work has many advantages, it’s also left many workers feeling disconnected and employers wondering how to engage them from a distance.

Hosting a virtual event for employees with a beloved celebrity is a great way to provide an experience that’s genuinely surprising and fun. Or reward high performers with personalized videos from their favorite stars to show them how much you appreciate them. Whether it’s Kenny G serenading them on sax, or a personal encounter with an elephant sanctuary, it’s definitely better than an “employee of the month” certificate.

In August 2022, the internet experienced a rare moment of genuine happiness when they met Tariq, a little boy who really loves corn. “Corn Boy” went hugely viral because he said what we all know to be true: corn is awesome.

Sensing a corntastic opportunity, Chipotle booked a business video with Tariq through Cameo. Together, they created a TikTok video about their shared love of chili-corn salsa (and racked up more than 56 million views in the process!)

This strategy worked because of the timing. It went live just a few weeks after Tariq rocketed to online fame, when “Corn Boy” was still resonating with online audiences. If you want to capitalize on a viral trend or meme, speed is everything. Fortunately, Cameo can turn around a business campaign in less than a week.

One of the biggest uses of Cameo? Sending friends birthday messages from beloved celebrities.

So Bud Light worked with Cameo to run a contest, encouraging UK residents to enter and win a celebrity birthday message for a friend. Through Cameo, they partnered with six UK celebrities and gave away six videos. The giveaway received seven times as much engagement as their typical campaign, with 92% positive sentiment from users. It also resulted in video content perfect for sharing on social media, further boosting brand awareness and engagement.

Who are the highest-paid celebrities on Cameo?

How long does it take to receive your Cameo video?

How do you receive your Cameo videos?

You’ll receive a link to your Cameo video by email. It will also be added to your Cameo account when it’s ready. You can find it by logging into your account and checking “My orders.”

How long can you keep your Cameo video?

Forever! Your Cameo video will be stored in your Cameo profile under “Your Orders.” You can also download the video and save it to your phone or computer.

Are Cameo videos accessible to people who are hard of hearing?

Yes. You have the option to turn on captions when you receive your video.

Can you ask celebrities to say anything you want?

That depends. Cameo prohibits requests that involve hateful or violent speech, as well as sexual or pornographic content. You cannot send or request nude videos, for example, or ask a celebrity to harass someone.

Some celebrities also have preferences on their profiles, particularly when it comes to roasts. Remember that you’re engaging with real human beings, and try to be respectful.

Save time managing your social media presence with Hootsuite. From a single dashboard you can publish and schedule posts, find relevant conversions, engage the audience, measure results, and more. Try it free today.

Do it better with Hootsuite, the all-in-one social media toolkit. Stay on top of things, grow, and beat the competition.

The post What Is Cameo? Using Celebrity Videos to Promote Your Brand appeared first on Social Media Marketing & Management Dashboard.